(PLACERVILLE, CALIFORNIA) Sept 19, 2022 — The Placer County Big Trees Grove is the northernmost and furthest removed of all giant sequoia groves. The Placer County Grove is closed until at least December 31, 2022 due to the September 2022 Mosquito Fire. The fire is about 2 miles from the grove. The road to the grove (Mosquito Ridge Road) goes through the actively burning area.

Placer County Big Trees Grove is a small, isolated giant sequoia grove located along Mosquito Ridge Road in the American River watershed of Tahoe National Forest, California. It is known for being the northernmost and furthest removed of all giant sequoia groves.

The Mosquito fire has impacted many communities in and around the Tahoe and El Dorado National Forests. It has also been threatening some important natural and cultural sites around the Forest. One of the unique resources we have been working to protect for many years and have placed particular emphasis on during the Mosquito Fire is the Placer County Big Trees Grove which is the northern most stand of the Giant Sequoias in the world.

For the decade Forest Service has been actively planning and implementing work in the Forest to make both the grove and the surrounding forest stands resilient to large scale fires like the Mosquito Fire. This grove of Giant Sequoias consists of six large trees estimated to be a thousand years old. The largest of these trees is twelve feet in diameter and is just over 225 feet tall. Very large Douglas Fur and Sugar Pines also dominate this area and it is home to the California Spotted Owls.

Historically this area experienced wildfire every eleven to twenty six years. However we have not seen wildfire in this location in over ninety years. As a result the forest in this area is generally high density and includes substantial surface and ladder fuels. This makes this area highly susceptible to damage during a wildfire.”We have been preparing for a wildfire for over a decade” said Garrett Dickman, Forest Ecologist at the Yosemite National Park.

There is a handful of juveniles that have popped up after proscribed fires in 2007 and 2018 that gave firefighters an opportunity to engage in giving the grove initial protection work.

The Placer County Big Trees Grove is most notable for how much of an outlier it is. It is the most distant from any other grove. And it’s the smallest grove, with only six living sequoias: a group of four small trees, plus two larger, isolated trees. Two more large trees fell in 1861.

The grove is very much off the beaten track, on a high ridge surrounded by deep, gorge-like valleys, about 25 miles east of Foresthill on two-lane paved roads. A few people pass by on their way to or from French Meadows Reservoir, but it’s not a very heavily-trafficked area. For the area the grove is relatively popular, and on a nice summer weekend there might be three or four cars in the lot. 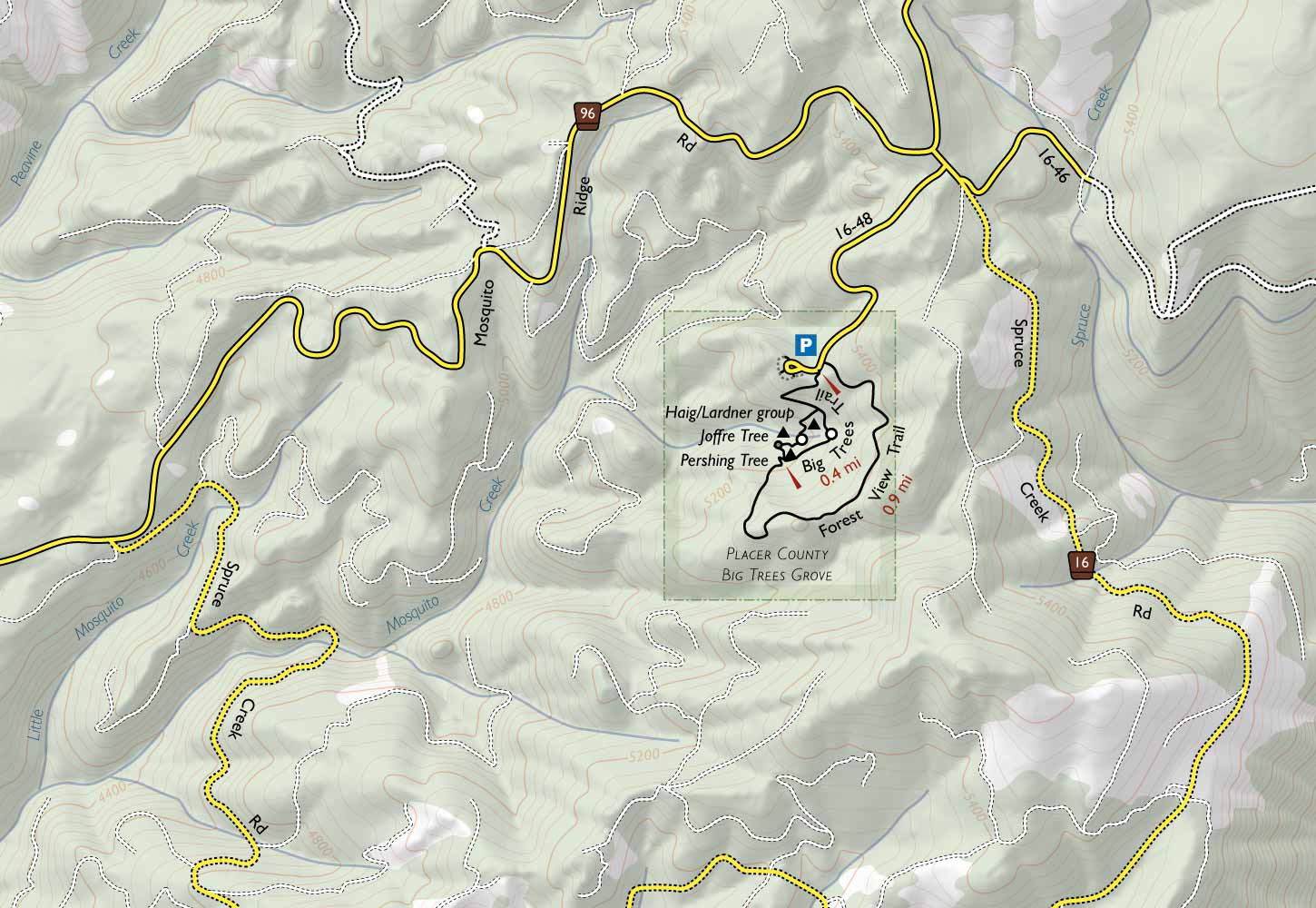